My Pastor Is My Hero 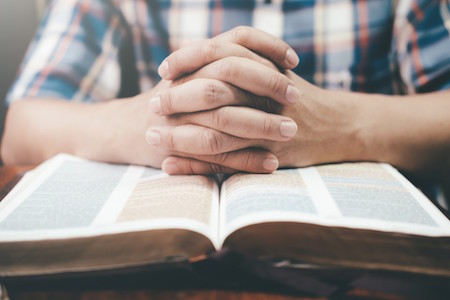 I have been battling mental illness for many years. Thankfully, I have been blessed with a wonderful support system, without which I most likely wouldn’t be able to function as well as I do today. But this wasn’t always the case. I know I can be a lot to handle, especially when my moods are out of control. I’ve had people tell me that they just couldn’t handle it anymore. Yet, there’s one person who has stuck by me through the good, bad and ugly: my pastor, Robby.

Unfortunately, at times, my mental illnesses take over every aspect of my life, but despite all the frantic emails and nearly constant drama that seems to run my life, Robby never gives up on me. There were many times I feared that he would grow tired of all the chaos in my life and tell me I was becoming too much of a burden on him—but that never happened.

One of my diagnoses is Borderline Personality Disorder (BPD), and a primary symptom of BPD is a fear of abandonment. That being said, I have sent Robby countless panicked emails, as I thought he’d had enough, and he was done supporting me. Instead of giving up on me, he provides reassurance and frequently states that he’s “not going anywhere.” Hearing him say that has helped me to trust him and understand that he wasn’t going to just pack up and leave.

Each time I’ve been hospitalized since I’ve known him—and there have been many—he always took time out of his busy schedule to visit me. The hospital was actually the first place we met. I had just crashed after a reckless manic episode that resulted in a lot of debt, and I felt like I’d hit rock bottom. I desperately needed help and someone to talk to. I thought a pastor I already knew was coming, and I wasn’t too thrilled about meeting somebody new in the psychiatric unit, but now I look back with gratitude. I remember sitting there sobbing and telling him what a mess I felt my life was. Robby listened to me, showed me compassion and even helped me come up with a plan to make things better. I felt so much more hopeful after that interaction.

There have been dark days since I’ve known Robby, but thankfully they didn’t scare him off. Instead, he attended one of my counseling sessions so that he could learn ways to help me better. I credit him with protecting me from myself on two separate occasions. Both times, I was not doing well and had planned on harming myself. He stepped in and disposed of the means for carrying out my plan.

There are no words for me to describe the extent that he has been there for me. He has always been positive, supportive and encouraging. He has never given up on me and has always given me hope. He even showed up at the oral surgeon’s office when I was having a minor procedure (which terrified me), so that he could pray with me beforehand.

I truly appreciate everything Robby has done for me, and I value his friendship immensely. I know it’s not just me; he works with many people who are going through a difficult time. He does it because he loves and cares about people. I don’t think my church could have found a better person for the job.

I honestly don’t know where I’d be mentally and spiritually if I hadn’t met him. As I work on my recovery, I hope to be able to give back to him and others the way he has for me.

Rachel is active in her church in the greater Akron, Ohio area. She holds a Master of Arts degree in sociology from the University of Toledo and is huge advocate for mental health. She also enjoys hiking, swimming and spending time with family and friends. She is currently employed at a nonprofit social service agency where she loves to help others.